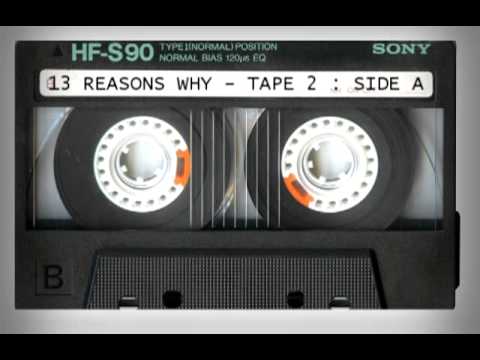 “Newcomer Katherine Langford plays the role of Hannah, a young woman who takes her own life. Two weeks after her tragic death, a classmate named Clay finds a mysterious box on his porch. Inside the box are recordings made by Hannah — on whom Clay had a crush — in which she explains the 13 reasons why she chose to commit suicide. If Clay decides to listen to the recordings, he will find out if and how he made the list. This intricate and heart-wrenching tale is told through Clay and Hannah’s dual narratives.”

In no particular order, here are 13 reasons to watch the new hit series (if you haven’t already):

This is a great way to get any spoilers between binging, and get more of the story if you need it.

OR: be a complete tool and be the one to say ‘the book was way better’

You can just be literal garbage and sit around and watch it ALL DAY.

10. The cast got matching tattoos and that is just adorable

The executive producer, and some of the cast got the popular semi-colon tattoo together. The cast and crew seem to be gushing over one another, I love it.

9. It is not one of the  sh*tty Netflix original series

8. You won’t be confused when all your friends and coworkers are discussing the show

You know, like I am with Game Of Thrones (DON’T JUDGE ME OK)

7. The story is powerful, and well written enough that it translates for adults as well as teens

Twitter was bombarded with tweets from adults who have dealt with depression including MTV Real World: Bad Blood star Jennifer Geoghan

6. The show deals with REAL issues and looks at mental health in way that is understanding and profound

These are REAL issues with people, and the show shines a light on them that was needed in TV

5. Selena Gomez is the executive producer

As if you needed another reason to love her

4. This weekend is a long weekend so you have no excuse for not having time to watch it

3. Although other teen shows have depicted depression and suicide in a very real way (I see you Degrassi), ’13 Reasons Why’ showcases it from a different angle

There is a lot of how others were affected by Hannah’s suicide which is something that is not typically depicted as much.

2. Dylan Minette is a great actor

He really brings Clay to life (no pun intended)

1. Honestly, it is just a really powerful show.