HOLY SH*T LAST NIGHT’S FINALE OF ARE YOU THE ONE WAS INSANE ARE YOU KIDDING ME?! I thought the blackout was crazy but dang. Well you haven’t seen the last of this cast this week’s interview is with my squad goal babe Kaylen Zahara who went through some rough Gio related drama this season. I sat down to talk to Zahara about Gio (former #TMITuesday feature), the cast, her blog, and more in this all new #TMITuesday!

1. How has your life changed since the show has aired? Are you better at dating now?

Being on Are You The One has changed my life for the better. I have gained a major platform which has enhanced my modeling career and even drawn major attention to my blog. When it comes to dating, I have learned to be way more cautious than I have ever been with men. I have to be careful with trusting too soon, and not peeping out all angles of a guy. I am currently attracting better candidates and crushing majorly hard on a lucky someone.

2. Ok Gio, he was instantly drawn to you. and the feeling seemed mutual; What do you think went wrong? Do you think he was true to his feelings throughout filming? What terms are you two on now?

G and I had an immediate chemistry coming into the house. The down fall of our “relationship” was due to his inability to admit that he was not the man he tried to be for me the initial weeks of things going well. He tried to be something he wasn’t and instead of accepting his failure, he blamed me for not being enough for him, when in reality I had everything he needed then and now for him to better himself.

Not too mention he wanted to go after someone else after leading me on. Just a case of common immaturity in a male. I have moved far along from our tv relationship and so G is a friend that I continue to mentor. The past is the past.

3. Speaking of terms, do you keep in touch with anyone from the cast?

I keep in touch with majority of the cast. Despite and past issues, we all made television together and lived together in Maui, HI for two months. We can’t act as if that doesn’t count for something.

4. Like myself you are also a blogger; What is your favourite part about uploading your posts, and videos?

For me blogging is a way for me to be of service to others in this world. My blog is my place to share what is going on internally. It’s my spirtual release to the world. I find that every post brings me complete joy and satisfaction. I am living out my purpose on this planet but sharing a new state of mind to those who don’t have the same perception or resources as I do.

6. As well as being a blogger, and reality star you are a model too; Can you describe your ideal photo shoot? 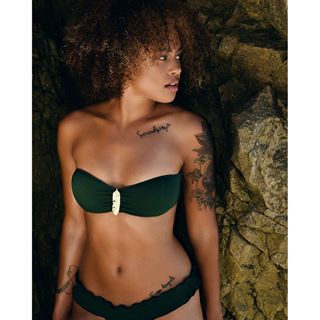 My ideal photo shoot is working with Brendan Forbes, in Bora Bora, for Vogue magazine for a Chanel ad campaign.

7. Since today is #TMITuesday can you tell the readers something about you that they may not already know?

One thing that most people don’t know off the bat is that I sing. I’ve got a passion for signing and hopefully in the near future you will be hearing some tracks from me 😉

8. Do you feel that yourself and the cast were accurately portrayed on the show?

I do feel that everyone was portrayed truthfully on the show. It’s television so of course you have to edit. So some things aren’t played in the correct order, however what was filmed was said and done by us as a cast. I don’t think any of us were portrayed as something we weren’t then. Editing can’t make you say or do something you didn’t say or do.

Even when the scene isn’t used when it occurred it still portrays your personality or characteristics of yourself at that time.

9. Who do you think is your ‘celebrity match’?

I think my celebrity match is Rihanna. We just need to be some island gals together even though I’m from “farrin” (Meaning, I am Jamaican yet from the states.)

10. Whats next for you Kaylen?

The grind never stops for me. I am currently working on building my brand, investing in major business ventures, and also working on my self help book. You will be seeing more of me back on your tv screens and many other forms of media.

Keep up with Kaylen on Twitter & Instagram, and stay tuned for new posts on my site every week! And you can catch up on the crazy season 4 on MTV.com